View source
watch 01:54
Obi-Wan Finale - The Loop
Do you like this video?
Play Sound

Y/N, also known as Your Name, is the main protagonist of Your Boyfriend and Peter's obsessive love interest. All decisions, behavior, and actions of Y/N are based on the player's choices.

Y/N has a gray body with simple features and limbs along with a round head with short hair in a ponytail. Their face only consists of a mouth and the characters "Y/N".

They wear a white shirt or a tanktop, a dark gray hoodie with a thick, horizontal, white stripe at the middle along with white drawstrings, a black cap, and black pants.

Y/N's personality all depends on the player's choices. It can range either from sympathetic, awkward, casual, disgusted, etc.

Not much is known about Y/N's early life other than what is shown in game. The game starts off with Y/N giving context to their present life, in which they described as "chaotic." Y/N's family has gotten into another drama, in response, Y/N left home and left for college. Y/N rented an apartment afterwards but needed money to pay for their rent, so Y/N got a job at a greasy spoon diner in which they deem as unbearable.

Y/N has a roommate, however, Y/N does not enjoy how their roommate always bring in a drop out into their apartment for late night "study sessions."

Y/N claims that their sleep schedule has been disorganized, and the rent for their apartment is late. Y/N also claims that they are "friends" with their roommate, and their relationships as friends keeps getting strained "thinner" as she keeps making excuses why she needs Y/N to cover half of their rent.

This caused Y/N to lose more money and is nearly broke.

One day Y/N visits the part of a park they love most because they are away from their family members and college classmates. It was going on peacefully until Peter showed up.

A few sketches of Y/N. Link 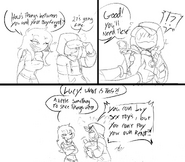 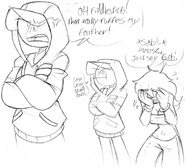