This article contains sensitive or mature content unsuitable for users below the age of 18. Viewer discretion is advised.

Reason: This game is not for users who are below 18 years of age. This video game contains mature themes such as graphic violence, nudity, kidnapping, sexual themes, abuse, etc.

This article contains spoilers for future Days or other content users may not be aware of. Viewer discretion is advised.

This article contains information about jumpscares. Viewer discretion is advised.

Reason: There may be a jumpscare at the beginning of the game. Viewer discretion is advised.

The player takes on the role of Y/N, a young adult who works at a greasy spoon diner in order to pay off their rent, is in an unexpected relationship with a stranger who goes by "Your Boyfriend". The player is then given choices to choose how they want to behave or act around the stranger. Every choice the player makes would lead to different outcomes and results, so the player must be aware of the consequences of their actions while playing.

The game's controls are very simple, the player must simply click on the screen if they wish to progress within the game.

*NOTE: In order to respect the game developers, information only about Day 1 will be documented until further notice. Days are levels the player must goes through in succession. Each day has a different storyline that all depend on the player's choices from the previous days.

Day 1 is the first day of the game. The characters introduced are Y/N and Peter.

In Day 1, all of the Easter Eggs consists of allowing the player to give the option of naming Peter whatever they like. However, if the player names them a certain name the results will be different and the dialogue will change.

Y/N: How about we DO call you 'Cockbite'. That's what you wanted, isn't it, Little Cockbite?

The Stranger: Yeah, even that is better than my real name.

Y/N: Then you get your wish, little "cockbite".

He gives a little smiles and nods. He writes it down on the fragile bit of disposable paper before handing it back to me.

Cockbite: Yeah, even that is better than my real name.: So, if I'm "Cockbite", do I get to have a nickname for you, too? Like "Pussycat" or "Slick-Kitty"?

Y/N: Just pay for my shake.

The Stranger: Wait, what was that?

The Stranger: H-How did you know my real name?

The Stranger: Urrrgh... I hate my name.

The Stranger: Were you talking to Girlfriend? Did she tell you my real name?

The Stranger: No, seriously, pick another name.

Naming Your Boyfriend "The Fuboo"

The Stranger: Besides, that sounds like the name of a sick creator who enjoys toying with other's lives.

The Stranger: On second thought, maybe you ARE my mother.

The Stranger: How about naming yourself something more pleasant and less... demented?

The Stranger: I mean... with all of the lewds she's drawn of me, no wonder I have issues.

Naming Your Boyfriend After Yourself

The Stranger: You're going to name me after yourself? How long did it take for you to decide on that brilliant idea?

The Stranger: I mean, seriously… Your complete lack of creativity is making you less attractive to me by the millisecond.

The Stranger: Wait… Did you feel that?

The Stranger: You just got more repulsive. Oh look... It happened again!

The Stranger: How about you actually TRY to give me a name this time, hmm?

*The player is given the option of renaming Peter again, if the player continues to rename Peter with the same particular name again:

Y/N: You may not like it, but can you smile for me, Peter/The Fuboo/*PLAYER'S NAME*?

After the game's initial release, its popularity slowly began to rise. A majority of the fan art are made by fans who are either Korean, Japanese, or any other Asian decent. There are also western fans who also joined the fandom.

There has been some issues within the community as there are some users who are not adults caught interacting within the fandom while this game is intended for adult users.[1]

What bees look like in Your Boyfriend's world. Link 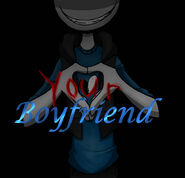 The cover art for the game's demo

Fuboo streams 'Your Boyfriend'
Fuboo streaming a commentary gameplay of Day 1 on YouTube.

The first concept sketch of the Your Boyfriend poster. Link